People are fighting on the left, between the Democratic party members and the progressive supporters behind Senator Sanders.  They are fighting, because Sanders doesn’t identify as a Democrat.  This is driving the Democrats nuts, because they are scrambling to get everyone together, so we can resist the GOP stronghold on our elected offices.

Meanwhile, the GOP are losing their moral platform.  The foundation of their party’s policies have been stripped, in the interest of focusing solely on the bottom line.  That bottom line is win election and re-election. Grab all the power, and keep fundraising. Fill a war chest, and make a very nice career out of a revolving door with the lobbying industry.  Sit on boards, do the bidding for those boards while in office, and return to those executive positions, ensuring a wonderful golden parachute and a wealthy living and retirement.

Amidst all of this, average citizens fight each other on the issues.  They fight on which party they align themselves with, ignoring the good, bad and ugly on both sides. What choice do we have?  We may have a democracy, but it is largely controlled by the two parties with the strongest infrastructure.  The conversation is generally about the establishment, as if that is some vague thing.  It’s really not.  We are talking about the people who know the rules.  They know the laws and by-laws.  Whether in the districts, or in their own party committees.  That knowledge is a tremendous power, in the game of politics.

Everyone is saying it.  This last Presidential election woke up some Americans. So many were so sure Hillary Clinton was going to win, people didn’t notice the alt-right flank that Trump had also woken up during the election.  This right-wing group quietly got their people registered and ready to vote. They didn’t need to make a lot of noise.

Trump kept saying that, solely because of him, we would be winning. So much winning. We would get tired of winning.  That has become a favorite for people trolling his oddball comments like this one.  We know he is full of hot air, has no plan, and knows practically nothing about running a government.  He doesn’t understand the different between articles and amendments in the constitution.  Most of us on the left reacted to his promise of so much winning, with “yeah, right”.

So how do we know what winning looks like anymore?

I can’t tell you what it would look like for the GOP. Probably no voting rights, less voting places, voter ID (aka suppression) laws, less turnout, and bigger campaign war chests.  Less regulation, less government programs for the lower and middle class people to rely on.  And of course tax cuts.  Tax cuts, tax cuts, tax cuts, but only for the wealthiest of the country, which will conveniently include the congress voting for it.

I can’t tell you what it would look like for the Democrats.  Probably getting Senator Sanders to stop attacking their “establishment” big ad ways.

I can’t tell you what it would look like for the progressive left. Probably getting Senator Sanders to take over the Democratic party, as chair, and re-invent the party into a true grass roots love fest.

I can tell you what it would look like for me.

100% voter turnout.  I know, that’s not realistic, so i’ll say above 90%.  In every district.  In every election.  There is a lot of focus around the 2018 midterm elections.  Real power does seriously and literally get built at the local level.  We have elections EVERY year.  Not every 4 or every 2 years, every single damn year.  Sometimes there is more than just one.  Depending on a state’s party primary rules, and whether they have open or closed primaries, there is the potential for primary elections.  There can also be special elections.  If a seat is vacated, for a myriad of reasons, an election can be set up to fill that seat, so it doesn’t remain empty until the next regular election.

In a country where we are all about the pride of being leaders of the free world, we seem to realize how lucky we are.  We don’t seem to take that pride to the bank, and show up when we should, to preserve that freedom.  We act like we could care less.  We are so free, we are free to no care, and not pay attention.  I agree and disagree with Bill Maher on various topics, but I’ve never seen anyone put this concept more plainly or precisely: 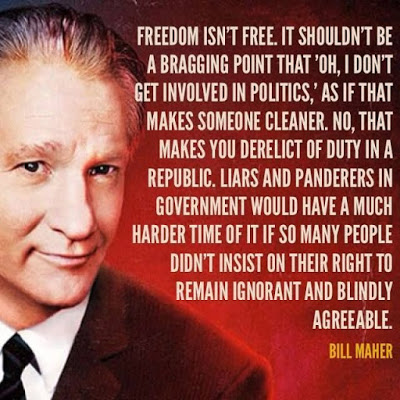 The buzz is that people started waking up, during and after this last Presidential election.  Have we?  Will we stay awake?  If so, we’ve got some work to do.  This is my rough list of what we really need to start doing now. Lobbying our state reps, for state level changes, and turn that power into a push for national laws:

Once all that is done, we need to get people engaged in the process.  Not just showing up to vote, but being ready ahead of that vote.  Who are the candidates? Who is in office now?  What is their voting record? Who do they stand up for, and who do they fail to represent? What legislation is being proposed, and how do I want my reps voting on that bill?  Calling them directly to tell them how they need to vote.  Keep track of whether they vote the way you want or not.

It is also important to contact the county level party, and find out who they are supporting, before they have their designation convention, where they name nominees.  People complain about both parties picking their nominees like a cherry off a private tree.  They do it that way, because people don’t pay enough attention to the process.  You can join that party’s county level committee, and become an election district rep in the committee. Then you get a direct vote as to who the nominee will be.  Don’t tell me it’s in the hands of the establishment.  If it is, it’s because you let them keep holding onto that power.

That brings me back to the in-fighting I’m seeing on the left, right now.  It’s starting to really piss me off.  There is the progressive flank supporting Senator Sanders, and then there are the die hard Democrats.  The former is a group looking in at a the other group and shouting at them about everything they are doing wrong.  The irony is, that those people doing the shouting don’t have the infrastructure or foundation to run a party as powerful as the Democratic party.  That’s why Senator Sanders sought their nomination, even though he doesn’t identify as a Democrat.  I don’t blame him, but I think he really needs to look at how attacking the Democratic party, is really just shooting his whole agenda in the foot.  We have enough of a battle in trying to resist the GOP, the last thing we need to be doing is fighting each other.

It’s not that their criticisms aren’t valid. Many of them are.  I am a life-long Democrat, and proud of it, but I totally get that the “establishment” politics has gotten out of hand in the party.  I think the fact that Keith Ellison didn’t win chair, shows that.  But like I said, the establishment is not as bad and evil as people like to claim it is.  The establishment includes lifetime  activists, public servants, volunteers, and people who literally know the rules and laws that affect what they want to get done. That kind of knowledge is power you can’t just throw away. It would be like throwing the baby out with the bath water.

That’s why Senator Sanders didn’t just team up with the Independent party or start his own party.  It takes decades to really make it, and through the history of this country, we have generally been politically ruled by a 2 party system.  We have the freedom for more, but organically we never have had more than 2 legitimate parties electing people to most offices.  There have been some exceptions, but not many.

The other side of this is that the Democratic party needs to learn from their past mistakes, and they are risking not doing that right now.  They need to clean house at the DCCC, and stop serving as an arm just for incumbents.  It needs to be what it should to be.  An arm of the DNC, with the specific goal of supporting candidates for election and re-election to congress.  Splitting up funds to those candidates, and helping any way they can.

Edit: I was just educated on the reality of this.  I thought the DCCC was part of the DNC.  It’s not. How is the Democratic party supposed to be able to have a cohesive, unified front, when they have different groups acting completely independently of each other. The left hand not only doesn’t know what the right hand is doing.  They end up working against each other.  One faction is supporting a candidate in a red district, and the other is either sabotaging that effort or at the very least, not helping to support the effort.

The DNC also needs to do a much better job at seizing the energy around grassroots campaigning.  It’s more than just low-grade campaign strategies.  It’s really about directly engaging with voters on the streets, and that will be more powerful than any ridiculously expensive tv ad.

They also need to stop attacking Senator Sanders.  He has a right not to identify as a Democrat, and still speak up for the same issues that Democrats speak out on.  It doesn’t help Democrats to be against Senator Sanders, and it doesn’t help Senator Sanders to be against the Democrats.  There is no way we can beat the GOP, and end their stranglehold on our elected offices, if we keep fighting each other. Period.  Both the party, and the progressive crowd must decide – do you want to fight each other or the GOP? You can’t do both. It’s like going to a school yard fight, bringing an ally, and then fighting the ally instead of the one you came to fight.

The GOP is counting on us continuing this, and I guarantee, there are trolls online trying to fan these flames to make it look worse and be worse.  The only way we can squash that, is for Perez and Sanders to get together quietly.  Come to terms they can agree on, and call a truce in the name of helping each other to reach the same goals.

People can blame Senator Sanders for Clinton’s loss, but it was never his fault. He had every right to run, and keep running, as long as it was legal for him to stay in the race.  He was respectful of the process, and bowed out at the convention.  The rest is in the past, and we need to move forward. We need to look at the landscape now, and if we are still bitter about the past, we need to ask how we can make things better going forward. How can we improve the process, so the next time we don’t end up with the same mistakes we had last time?